Light-based wireless communication, also known as Li-Fi, uses light to transmit data through the air, offering a promising way to bring the internet to areas where it can be challenging to build cost-effective optical fibres and cell towers. Using laser light to carry information across the atmosphere can potentially offer very high bandwidths and data capacity, but one of the primary challenges has been how to precisely point a very small laser beam (which is carrying the data) at a tiny light detector that is some distance away. 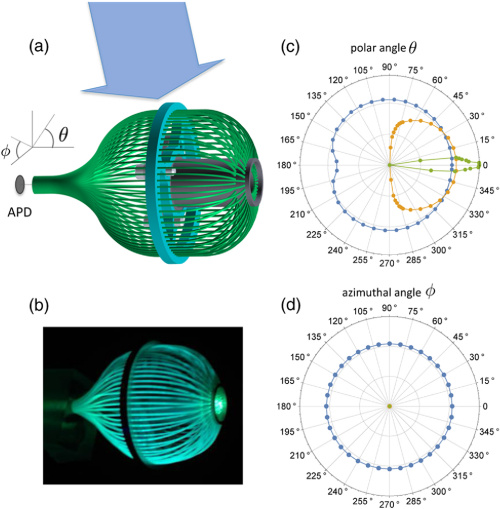 In the new study, Facebook researchers demonstrated a method for using fluorescent materials – instead of traditional optics – to collect light and concentrate it onto a small photodetector. They combined this light collector, which features 126cm2 of surface area that collects light from any direction, with existing telecommunications technology to achieve data rates of more than two gigabits per second (Gbps). In 2015, average internet speeds in Germany reached 10.2 Megabits per second (Mbps) – with one gigabit representing 1,000 megabits, the speeds achieved by the Facebook team are much higher than what is achievable using existing telecommunications technologies.

‘We demonstrated the use of fluorescent optical fibres that absorb one colour of light and emit another colour,’ said Tiecke. ‘The optical fibres absorb light coming from any direction over a large area, and the emitted light travels inside the optical fibre, which funnels the light to a small, very fast photodetector.’

‘The fact that these fluorescent optical fibres emit a different colour than they absorb makes it possible to increase the brightness of the light entering the system,’ Tiecke continued. ‘This approach has been used in luminescent concentrators for solar light harvesting, where the speed of the colour conversion doesn’t matter. We showed that the same concept can be used for communication to circumvent pointing and tracking problems while accomplishing very high speeds.’

The fast speeds are possible because less than two nanoseconds pass between the blue light absorption and the green light emission. In addition, by incorporating a signal modulation method called ‘orthogonal frequency division multiplexing’, or OFDM, the researchers transmitted more than 2Gbps despite the system’s bandwidth of 100MHz. OFDM is a method of encoding digital data so that multiple data streams can be transmitted at once. Although it is commonly used for wired and wireless communication, it is not typically used with laser communication.

In the Optica paper, the researchers demonstrated a light bulb-shaped light collector made from a bundle of fluorescent optical fibres. Although many shapes are possible, the light-bulb shape offers a very large bandwidth and omnidirectional sensitivity, which means it would work with mobile devices that move around with respect to the transmitter. The researchers also demonstrated that this geometry can gather light from an area as large as 126cm2, making it less sensitive to alignment.

Read the full article at http://www.electrooptics.com/news/news_story.php?news_id=2567